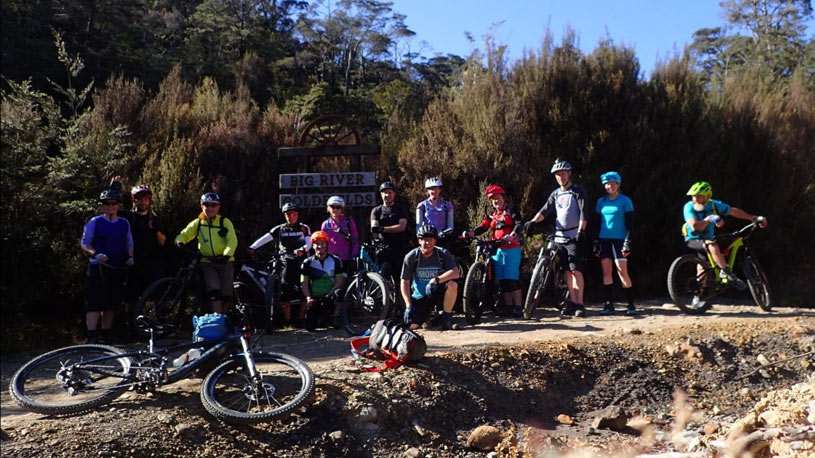 We had a great turnout for the ‘Reefton Relics’ Labour Weekend Club trip, with 13 riders fronting for the weekend. On the first day, the West Coast weather gods smiled upon the CMBC crew, as they set out on the Big River ride, starting with a light mist keeping the temperatures down for the first part of the climb, opening up into a cracker blue-sky day for the rest of the trip. Even better, was the fact there had been no rain for about 3-4 days prior, and the trail conditions were mint (you can add a grade of technicality to the Waiuta track if it is wet). Fresh faces (and backsides) on day 1 of the trip.

We had the ride organised to accommodate 2 levels, an ‘In & Out’ on Big River for those more sane riders who wanted to avoid the more technical Waiuta track, but still wanted the challenge of a 50km ride with plenty of climbing involved, and then the 80km Big River/Waiuta loop for the 11 nutters who wanted an even bigger challenge, or just failed to read the ride description!

The whole area is rich with history, mostly gold-mining, with plenty of information boards along the way to help colour-in the stories of the area, and the folk who lived there. It’s like mountain biking through a museum! Big River settlement remains. Lots of history to be found along the trails.

It’s well worth a short climb up a side track to the Steam Winder, which is in great condition due to a massive shed constructed to preserve it. 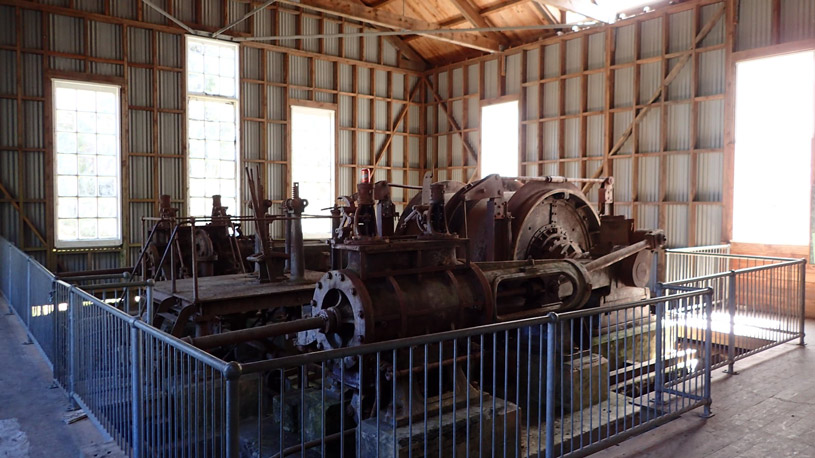 Its well worth climbing up the hill, for a 4km return detour to the steam winder.

We had lunch at Big River hut, before heading into Waiuta Track – for those of us who have not ridden it for a few years, we were pleasantly surprised by the improvements which have been made to parts of the track, especially towards the Waiuta end of the trail. It made for fantastic riding, especially combined with the primo weather!

The Waiuta Track starts off deceptively easy from the Big River end, then there are some hike-a-bike sections!

We also stopped for a look at the relics around Waiuta, before a nice long descent down the gravel road, back to the State Highway. And then came the grind – yup it’s around 20km along the Highway back to Reefton, but saves shuttling, and also you couldn’t say you rode the loop without that! Those with a bit of a roadie heritage outed themselves, as they sailed off in their pelotons (you know who you are – we won’t publicly shame you here!) but eventually, with the promise of a hot shower, and a cold beer, we made it back to Reefton & the pub! Day 2 was spent riding Murray’s Creek loop, while much shorter, still has some good climbs and challenges along the way, but also exacerbated by your legs reminding you about the Big River loop you did the day before. Again, this loop is full of history and gold mining relics, so well worth checking out. Once back in Reefton, the Bakeries, Pub, and apparently the Gin Distillery, were invaded by Mountain Bikers.

For Day 3, we decided not to tempt fate with the weather gods, and with 2 great days of riding under our belt, and the weather closing in, we set sail back to Christchurch.

Thanks to all the riders who came and brought their positive attitudes (and banter too) which is what makes these trips great. Special kudos to those who had not attempted MTB rides of this nature/distance before. Hopefully, this will be etched in your memories, long after the pain fades!

For more photos check out the Event on Facebook.